I was so excited about visiting winemaker Mitch Cosentino at his new tasting room!  I’ve tasted his wines every year for the past few years here in Santa Clarita but had never visited him.  And his new label, PureCru, has a new perfect pairing: a wine tasting bar (which means it’s open at night too) in downtown Napa. 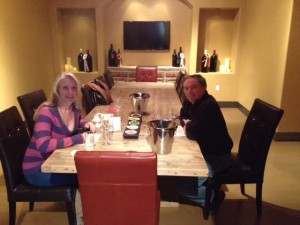 “A Winemaker’s Wine Project: A unique company and brand originally and principally built around one wine. Any wine from pureCru wines will be designed for the fine cuisines of the world by Winemaker/Founder Mitch Cosentino.

While Napa Valley is to be the prime area of grape sources, we will not be limited to Napa. Great fruit from great vineyards without limitations is the only fruit this company will use in any wine.

As vintages vary we want to produce only consistently great wines and not be limited to producing wines from a vineyard in a sub-par-vintage. As a result there may be vintages we skip due that vintage’s failure to meet our expectations.”

Cosentino met my husband Eddie and me at the tasting room and showed us around his new place: a long bar with plenty of tall leather chairs, tasting tables for groups, and a nice alcove off to the side where bands sometimes played during the evenings.  Then we sat down at a boardroom-sized tasting table, in another room for larger parties, and got started catching up while tasting:

Cosentino said this wine was similar to his wine The Novelist and modeled after Haut Brion Blanc ($1300 a bottle).  There was no malolactic fermentation – which allows these whites to age.

(Aromas and flavor separated by “;”)

Cosentino said this was styled like an old Chablis using an old Meursault clone, 100% barrel fermented on the lees, no malolactic fermentation so the creaminess is from the stirred lees.  Used 40% new oak by a French cooper – personally designed for Cosentino after visiting him.  Cosentino said that one-year-old French barrels are the best to use as they’re not as strong.

Made through a co-operative with the grower, they skipped 2011, next vintage will be 2012, and there are less than three cases left of this wine.  “Color on Pinot Noir is like clothing on a woman – not needed” an old quote that originated in France and repeated for fun by Cosentino.

Has received several gold star medals, as many of his wines do: Orange County, San Francisco, etc.  The wine is made like a Brunello with a third year in barrel, and blended like a Super Tuscan.  A $28 bottle of wine – a price Cosentino can do even with all that time using up space and barrels in the aging!

33 months in French Oak and bottled in September 2013

Cosentino has been the longest continuous producer of Cab Franc in the valley, since ’85.

In this vintage Cosentino said that the Cab Franc is the most dominating and spicy, Merlot adds spice and texture.  Just released after August 2013 bottling.

Designed to fit the palate and cuisine of Chef Michael Chiarello and his restaurant Bottega.  Chiarello tasted it and agreed that it was like his cuisine.  He was the first one to get the wine, and this year it was only available at his restaurant.

Cosentino said it has the “magical fourth dimension” of Sangio to add red fruit to a black fruit Bordeaux.  Cosentino called it a Meritage Plus, explaining that this “fourth fruit fills all the points of the mouth” and is very close to a super Tuscan.  Designed to be its own specific deal, he said, and the Sangio fills in the mouthfeel.

Most awarded Meritage wine of all time, his first vintage was 88.

Near perfection, balanced fruit and tannins, want with lunch…now would be good.  Mitch said it’s broad on the palate. We had to have this one to take home too! 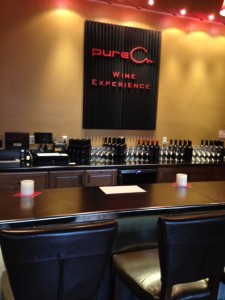 Juicy red to black fruit, green pepper; chewy, good to drink now, not as dry and dark as other Petite Sirah.

Conclusion: If you missed a Cosentino sighting in Santa Clarita Valley this year, don’t fret, order straight from his website.  Or go to the tasting room in downtown Napa and taste it all like we did!

The wine was a gift for review from the winery representative and I tasted about a month before my visit.

Heavy bottle with a heavy punt made me think, this would be a heavy-duty wine.  The color was of deep garnet in the center of my glass, a bit of a burnished edge.  The aromas reminded me of sweetened dark plum, blackberry, blueberry, cigar and simmering beef stew.  Once tasted I got flavors of dried blue and black fruits, cracked pepper, black licorice, very dark chocolate and earth.  90 Eve Points easily.

More of Eve and Mitch

Love reviewing bubbly, and this time it was a Piper Sonoma Brut NV from Sonoma! … END_OF_DOCUMENT_TOKEN_TO_BE_REPLACED