The first time I met Victor Abascal, Winemaker/Owner of Vines on the Marycrest (VOTM) was at the Wine Classic, an event that ran a couple of decades as a fundraiser and held here at Cal Arts. I can still see Victor at his table pouring his wines, and had routinely seen him pouring his wine at other charity events, but I had never visited his Paso winery. And, as I stated in an earlier article, this trip was all about visiting wineries I had never visited before. And seeing Victor and his lovely wife Jennifer, was more than called for. 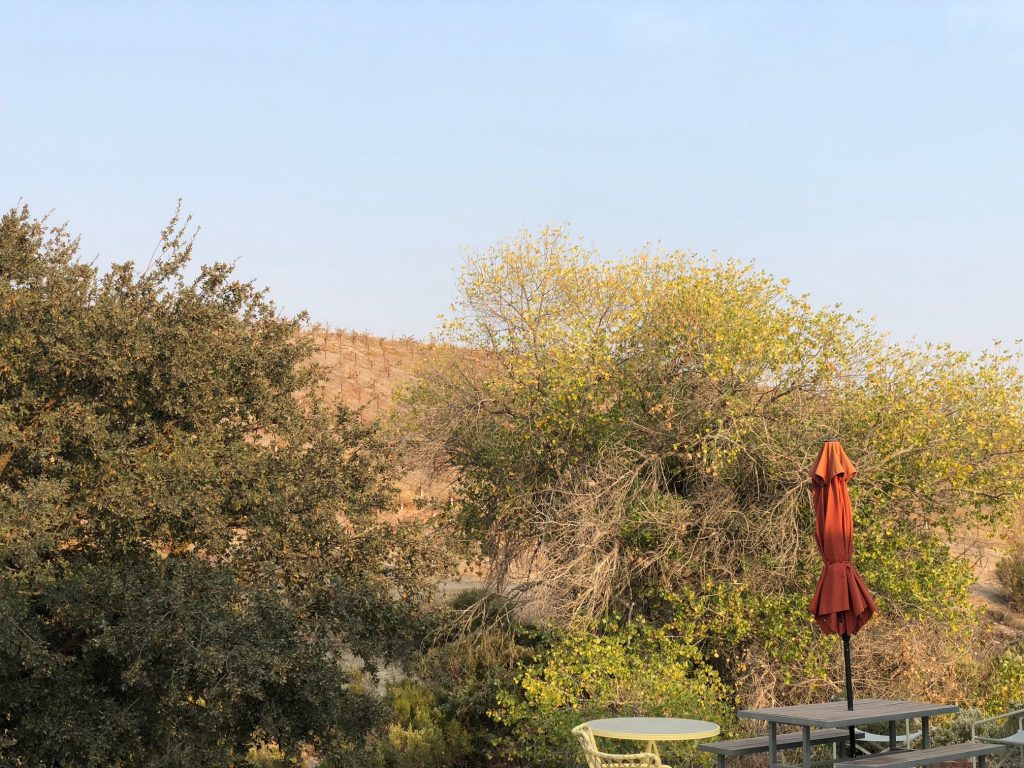 We learned that they had the property for 9.5 years, it was an almond orchard previously. When I noted the number of wines on the tasting list Jenny said, “We can’t pour less as we make too many.” One third of their sales are snatched up by wine club members.

The modern tasting room was the very first tasting room in Paso I’ve been in that is bathed in afternoon sun, very welcome as the days start at 28 degrees when we visited in early November! The place was jumping as Vic played some of his favorite music, while the bar was crowded with happy tasters that made room for two more.

For $10 – waived with purchase – we settled in to sample nine wines. Tasting notes were supplied so, as is my habit, I tend to circle what I found as well as making some additions, so my tasting notes are a collective “blend” so to speak.

Lemon-lime, green apple, grass and gravel on the nose with peach and other welcoming fresh fruits on the mouth.

With welcome aromas of berries followed by flavors of bright fruit including cherry, spice and mint.

On the nose we got blueberry, black plum, dark earth on the nose and palate as well as a bit more brightness than expected.

Agreed with the tasting notes in finding a raspberry liqueur note on the aroma, as well as strawberry. Tasting the wine we also found that same liqueur as well as a bit of vanilla.

While I had notes of cream and mushroom wafting up to my nose the tasting notes also mentioned more I could agree with: red and black cherry, dust, earth, oak, pepper and sweet tobacco. On the palate there was also a sweetness in the finish. This was one both my husband and I agreed we both liked. Victor said it was the least planted and most performing grape in Paso, and his “has curves on it.”

Another favorite: With a big bold nose with lots of black fruit, that carried through to the flavor along with spice and good fruit.

And another fave: Yep, I agreed with the tasting notes that mentioned cassis, smoke, candied pecan and flavors of dark berries and cola. Nothing to add except that it was grand.

And yet another one we really enjoyed: I noted white pepper, a creamy quality and balance followed by chocolate covered cherry, Chambord liqueur and a bit of pine needles.

Not wine: “Back Patio Bliss” is a live CD offered for purchase at VOTM. Five years’ worth of music “recorded live on our back patio” and includes music from “national touring musicians.” They made 1000 copies that sell for $20 each and you can check it out, along with the wines of course, on their website: https://vinesonthemarycrest.com/shop/

Spirits Education Trust (WSET), a “certification in first globally-recognized course” as an American Wine Specialist ® from the North American Sommelier Association (NASA), Level 1 Sake Award from WSET, was the subject of a 60-minute Wine Immersion video (over 16k views), authored “Wine Etiquette for Everyone” and has served as a judge for the Long Beach Grand Cru and the Global Wine Awards. You can email Eve@EveWine101.com to ask a question about wine or spirits. You can also seek her marketing advice via Eve@EveBushmanConsulting.com

Did you miss me? My blogs over the past two weeks were “Vintage Eve” articles as … END_OF_DOCUMENT_TOKEN_TO_BE_REPLACED