The SCV Wine Class held last Saturday night, has set the standard for local wine tasting events for over 20 years, expertly welcoming both new release and vintage wines as they do new wine drinkers and vintage experts.

In helping to raise needed funds for the Student Orchestras at College of the Canyons the classic was once again planned by many people.  And this column will not only offer a ‘taste of the classic’, it also serves to list and thank many that participated.

OHMIGOD it was tough not to drink everything at the library wine table and leave something for the rest of you – but we did.  Even though each cellared bottle was valued well above my expectations.  My husband, with the memory of …well a more sober person…tells me that we had a 1986 Pichon Longueville Bordeaux, 2003 Martinelli Zinfandel, Harlan Cabernet, 1989 Ducru Beaucaillou Bordeaux, Trockenbeerenauslese Rüdesheimer 2006 dessert wine, Bryant Family Cabernet, 2001, Shafer Hillside Select Cabernet, various Seasmoke, Talley Vineyards and Williams Selyem current release and older Pinot Noirs, Martinelli library wines, 1989 Cos de Estornel, 1990 Rauslan-Segla, 1986 Chateau Guiraud sauternes, older Napa Valley Cabernet Sauvignons, 1984 Phelps Insignia, 1986 and 1987 Phelps Eisle Cabernet Sauvignon, …and dozens of others. 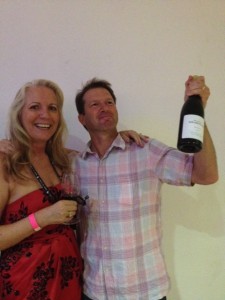 New friends serving wine: Michael Cobb, owner of Sort This Out Cellars, Victor Abascal, proprietor and winemaker for Vines on the Marycrest, Craig Butler winemaker for B & P Winery, the ladies of Midlife Crisis Winery and John Whitman of Old Creek Ranch Winery.

Friends having fun drinking wine: Steve C. dragged me from one table to another to try something…that I’d already had – while the same thing happened to my husband, Yelp friend Laura was far too pretty in person to immortalize with a photo in this column, Margie C. had her husband take photos of us that I’d like to see, Jeff J. cruised the room in sweet satisfaction, Dave B. introducing me the generous Les Hershberger, Rose W. enjoyed being mistaken for her sister and Diane G. kept us moving.

Of special note are John Burton of Southern Wine & Spirits of Southern CA, and Kevin Byrne of Wine Warehouse, each of whom recruited 8 to 10 wineries whose wines their companies represent, to attend the Wine Classic and pour their outstanding libations.

Other volunteers who gave generously of their time: Janet Linahan who chaired the Restaurant Committee with help from Arlene Saretsky and Denise Maggio, Elena Chao and her husband Kirk Wong who organized and hosted the Vintners Dinner, Diana Ramirez who supervised the set up of the event, Linda Krantz and Erin Weideman who very successfully ran the Silent Auction.

Volunteers, under Volunteer chair Sue Stanger, also included many parents of students, the students themselves and numerous friends and family members who managed to get themselves press-ganged into helping throughout the day.  The invaluable support of these individuals is critical to the event’s success.

Other areas of Recognition

This year the College of the Canyons Foundation was actually serving as the host of the event, providing the SCV Youth Orchestra Foundation with scads of operational support.  Foundation staff Shannon Munoz, Sharon Platz, Michele Edmonson, Cathy Ritz and Murray Wood all provided invaluable help in getting the event up and running, and advertising it more widely than ever.

Responsible for the perfect design and smooth maintenance of the Wine Classic’s web and online presence was John Green and Nick Pavik from College of the Canyons – their creative work is always superb! John McElwain provided his database expertise to ensure that we reached everyone who might possibly want to sample a few wines.  Rounding out the marketing team, Jasmine Foster worked on outreach to the community obtaining sponsorships, auction items, advertising and other marketing support.

Music at the Vintners Dinner and while patrons are lining up to enter was provided by Chamber Groups from the Student Orchestras.

Tom Bwarie had a long line at his table all night, where he tirelessly engraved everyone’s wine glass. He drove up from his gift shop in Carlsbad, The Bwarie Gift Basket Company, having donated a beautiful gift basket, including Silver Oak and Twomey wines, engraved for the occasion.

One long-term participant at the Silent Auction is Andrew Weiss Gallery of Beverly Hills.  They have supported the event for five years, each year donating a piece of fine art to the cause.

The SCV Youth Orchestra is a three-tiered instrumental education program that was founded at CalArts in 1969 and moved to College of the Canyons in 1989. The Wine Classic is a key fundraiser for this organization, which provides a positive and creative outlet for hundreds of young musicians throughout the Santa Clarita Valley.

Did you know that a thriving wine country exists in Silicon Valley’s backyard? … END_OF_DOCUMENT_TOKEN_TO_BE_REPLACED