During a wonderfully paired four-course luncheon at Cafe Del Rey in Marina Del Rey, with wines from Georgos Nu-Greek Wines, we sampled the wines listed below. But before we got started we (the “we” being the #LaWineWriters group run by fellow writer Cori Solomon) reviewed the tech sheets in front of us. 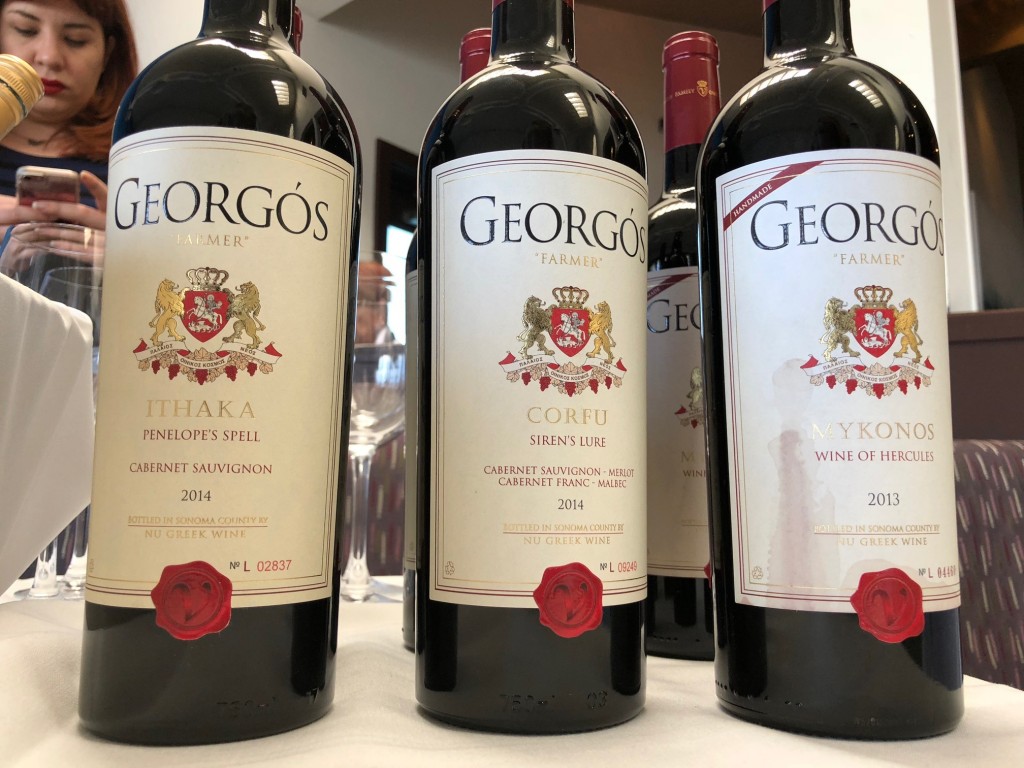 Georgós (Zanganas) believes that the wines represent not only super-premium quality and flavor profiles at a value, but also a healthful choice in wine, which he calls “nu.”… wines are blended, finished and bottled at Deerfield Ranch Winery in Kenwood, Sonoma Valley…And for Georgós, the “nu” extends across the winemaking process. He explains: “We hand-pick and triple hand-sort all of our grapes to remove anything foreign—bad grapes, stems, foreign objects—’everything but the grapes.’ In the end, we only have the best quality grapes…

Robert Rex, the winemaker for Deerfield in Sonoma, is in partnership with Georgos to make the wines in Sonoma, some with 100% juice from Greece, and some blended with Sonoma grown varietals.

I had figured that it would be nearly impossible to graft the Greek varietals to our vines successfully as our terroir is completely different, for one in Greece the vineyards are completely dry farmed. I have had plenty of wines made from imported juice as well, and most if not all have been very good, so with that said, I was looking forward to the tasting.

The Wines and Menu (my tasting notes, starting with EB, follow theirs)

The wines combine “unforgettable names of the Greek island with mythology.”

Santorini, “Sophia’s Smile”: a 2016 Assyrtiko similar to a dry, crisp Sauvignon Blanc that has citrus aromas with a rich, earthy mineral character, and the acidity to stand up to meat and seafood with notes of lemon and apple. Unoaked. EB: Pale gold to hay in color, aromas of lemon-lime, pear, white peach and wet stones. On the mouth there was that lemon again, pear, mild acidity and a nice light finish. This was served with a Caesar Flat Bread that refreshed the palate and did something amazing to the wine.

Ios, “Aphrodite’s Kiss”: a 2016 Dry Rosé of Agiorgitiko (until recently the most commonly cultivated grape in Greece) that has all of the flavor of a Pinot Noir with the crispness of a Sauvignon Blanc. Fermented with skins on for 16 hours, it contains hints of apple and peach. Unoaked. EB: The color of a dark peach with aromas of rose petal and earth, followed by flavors of pink grapefruit, tart peaches, lemon and ash. This was our aperitif wine! Worked well!

Mykonos, “Wine of Hercules”: a 2013 vintage Agiorgitiko in the Pinot Noir style that is both light and delicate yet flavor-forward in a Burgundy tradition, with a nose of strawberry patch, a touch of allspice, pepper and sandalwood. Earthy flavors include maitake with a pleasant and multi-layered finish offering faint notes of licorice. EB: Very dark red with a brown edge, indicative of a heavier style wine other than a Pinot, and/or an aged wine. This means nothing compared to aroma and flavor, just an observation. But, then again, maybe it did matter as I got aromas of ripe black cherry, dark chocolate, dust and earth. But what fun I had when I tasted it and got that tart red cherry, raisin and a very dry finish. So the aromas spelled something else to me, but the taste was more Pinot Noir-like. We had this with an amazing dish of Seared Scallop, with tomato aguadulce, and butternut squash!

Ithaka, “Penelope’s Spell”: a 2014 blend of California Cabernet and Old World grapes that is dry and big, yet gentle for a Cabernet. It’s perfectly balanced and delicious. The nose is a true Cabernet, offering bits of leather, currants, and blackberries. EB: The label reads Cab and nothing else so that tells me it’s at least 75% Cab. The color was a deep red, aromas of crushed blueberry, stems, chocolate covered cherries and a bit of mushroom. On the palate I noted big red to black fruit, firm tannins and a long finish. This was served alongside lovely NZ Lamb Lollies with polenta, Brussels sprouts and coffee currant sauce.

Corfu, “Siren’s Lure”: Georgós third vintage, 2014 Cabernet blend aged a year in the barrel, where Cabernet Sauvignon forms the base, Cabernet Franc gives lift, Malbec adds allure, and Merlot adds enchantment. EB: This would prove to be my favorite wine of the tasting. The label didn’t give the percentage of Greek juice in this wine. A deep purple in color, and a nose of a Bordeaux blend with notes of blueberry, blackberry, violets and bark. It had a nice mouth coating viscosity, with that same blue and black fruit, medium acid and extremely well balanced. The prices for these wines were $18 to $35 I guessed this one to be the $35 bottle, if not, it should be. With the pairing, mouthwatering Kobe Bolognese with tomato, onion and penne, a sweetness to the wine came forward.

The longtime regional wine experience returns after a Covid hiatus, offering its … END_OF_DOCUMENT_TOKEN_TO_BE_REPLACED