Every two years, trade and media has the opportunity to “taste the world” with distributor and importer Henry Wine Group. In a large ballroom at the Westin Bonaventure filled with wine and a small section devoted to spirits [covered by Eve in a recent article] we got to sample literally hundreds [if one were so inclined] of offerings from a wide variety of domestic and international producers. 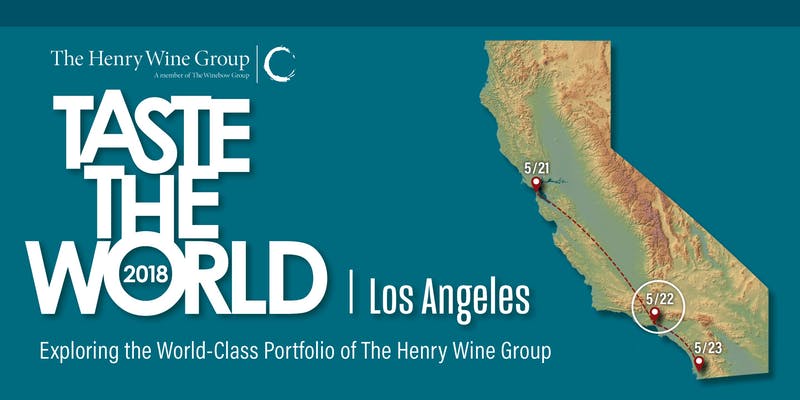 Upon entering the event, we were provided with a wine tasting glass and a 158 page book – I told you there were a lot of wines to taste! Here were some of my favorites…

Ancient Peaks – I always love the Renegade and the Oyster Ridge blends, and the 2015 and 2014 of these, respectively, were both excellent.

Andrew Murray Vineyards – Another old favorite, one of the wineries that first got me into Rhones. The 2016 Enchante did it for me today.

Elizabeth Spencer Winery – I wasn’t really familiar with this Mendocino based winery but getting introduced to their delicious 2016 Grenache solved that problem.

Joullian Vineyards – One might not expect great Zinfandel and Cabernet Sauvignon from the Monterey Peninsula, but this winery in the Carmel Valley belies that notion with their 2013 ‘Sias Cuvee’ Zin and 2014 Estate Cab.

Mettler Family Vineyards – I liked all three of the wines this Lodi winery was pouring – the Estate Cabernet, the “Epicenter” Old Vine Zinfandel and especially the Estate Petite Sirah, all from the 2015 vintage.

Mundovino – This importer had a whopping 10 tables at the event. Admittedly, I tend to focus on domestic producers but I wanted to try some Argentinean Malbec. I tasted some very impressive wines from Catena at all price points, especially the 2014 Catena Zapata Alta Malbec and the 2015 Catena Zapata Argentino Malbec.

Pestoni Family Estate Winery – Another new to me winery, I enjoyed everything they poured – 2016 Rutherford Sauvignon Blanc, 2015 “1892” Field Blend and the 2013 and 2014 Howell Mtn Cabernet Sauvignons.

Saucelito Canyon Vineyards – Great Zinfandel from the Arroyo Grande Valley? You better believe it. Their 2015 Estate Zinfandel comes from a vineyard that was originally planted in 1880.

Shafer Vineyards – Shafer’s Cabernet Sauvignons are legendary and I wasn’t going to pass up a chance to taste them. Loved both the 2015 One Point Five Stag’s Leap and of course the 2013 Hillside Select Stag’s Leap as well.

Sinor-Lavallee – Bringing this list full circle, this is Ancient Peaks’ Director of Winemaking Mike Sinor’s own project. The Pinot Noirs were great but I was admittedly here for the Syrahs – the 2013 White Label – Bassi Vineyard, 2015 SLO/Estate and 2014 Black Label – Bassi Vineyard were all outstanding.

There was obviously a lot more I could have tasted [158 pages, after all] but I probably spent too much time catching up with various members of the trade who I’ve known over the years. My biggest takeaway from all this is that Henry Wine Group represents some excellent wineries. If you see their name on the label as distributor or importer, you can be assured you are getting quality, regardless of the price point.