This is the last article in my series on the Napa Valley for 2017. Today we will have a virtual taste from Phifer Pavitt, Tank Garage Winery, Larkmead and Joseph Phelps. 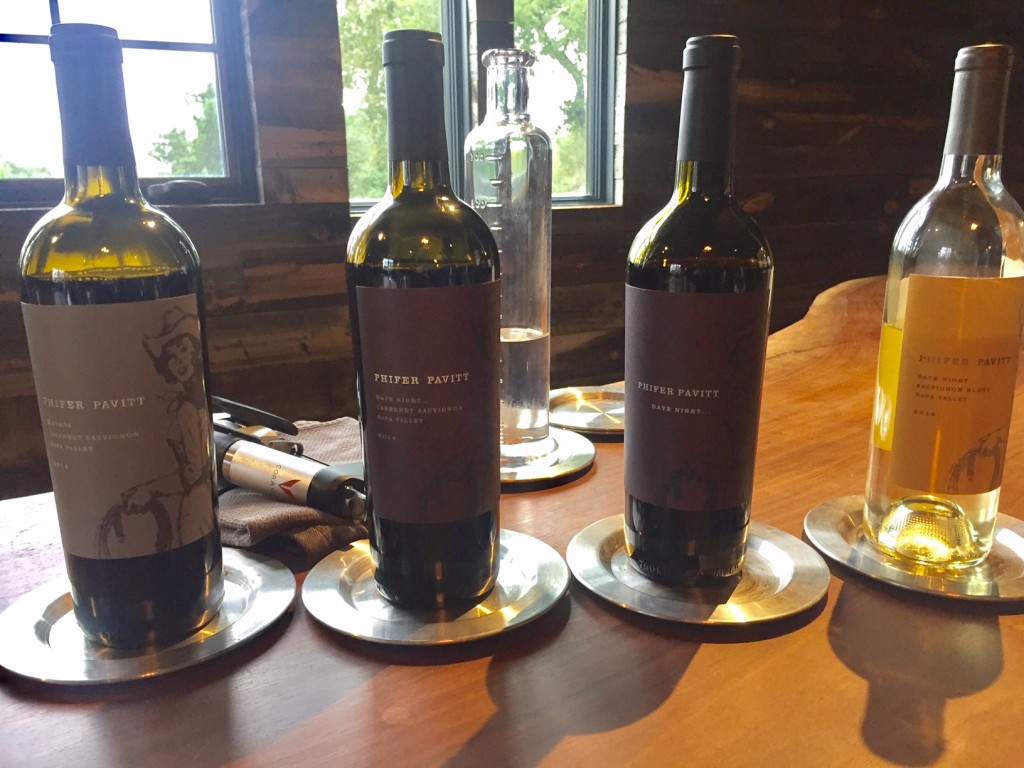 We met with Luke Speer, the Director of Hospitality, for our tasting. Phifer Pavitt is known (written up in Wine Spectator 13 times so far) for their “Date Night” Cabernet Sauvignon and Sauvignon Blanc. New for them: the XRoads Cabernet Sauvignon. A sparkling has recently been added but, woe is me, none was available for tasting during our visit.

We began with the 2016 Phifer Pavitt Sauvignon Blanc – fresh, crisp, lemon-lime, fleshy peach with low acid and a long finish. I’m partial to this wine as I’ve known the winemaker before he made commercial wine and have been a longtime fan: Gary Warburton. Next we tried the 2013 Date Night – It was big, dry and tannic with exceptional plump blue to black fruit, fig, smoke, aromatic and perfumy. Their red winemaker Ted Osborne always does a great job. Now onto the 2014 Date Night – I got a bit brighter fruit than I did from the 2013, but with the same plumpness. Very well done. The 2014 XRoads Cab had great fruit from the valley floor: red fruit, dried blueberry, black cherry, and very balanced with the tannins. Destined to be a hit.

Tank Garage Winery: Completely Out of the Tasting Room Box 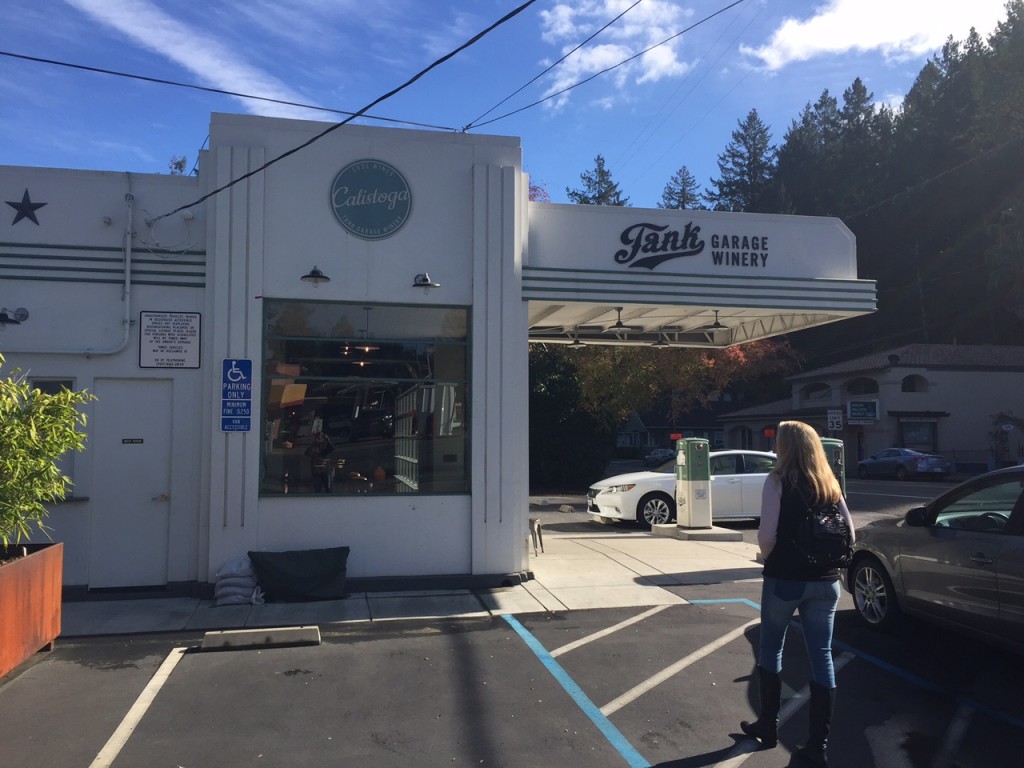 Can’t recall exactly where I heard about the Tank Garage Winery, but it was either via a wine trade or marketing magazine. I had read it was a unique space with a unique brand. What I discovered is that this is a must stop for those looking for a different experience, or those new to wine looking for some fun.

Several out-of-the-box ideas flew at me:

The wines we quickly tasted through (I didn’t make an appointment and had another coming up) included a 2016 “California Stroke” White Wine, California, 92% Vermentino with 8% Verdelho, skin fermented; 2015 “Nothing Gold Can Stay” 100% Chardonnay, Napa Valley, 40% new oak and 60% neutral; 2015 “Like You Stole It” Red Wine, Contra Costa County, blend of Mourvedre, Grenache and Carignane; 2015 “Take It Easy” Red Wine, Sonoma County, a blend of 96% Zinfandel, 3% Petite Sirah and 1% Carignane; 2014 “The Heavy” Red Wine, Napa Valley – the only label that stays with each vintage – and a blend of 73% Cabernet Sauvignon, 20% Merlot and 7% Cabernet Franc. 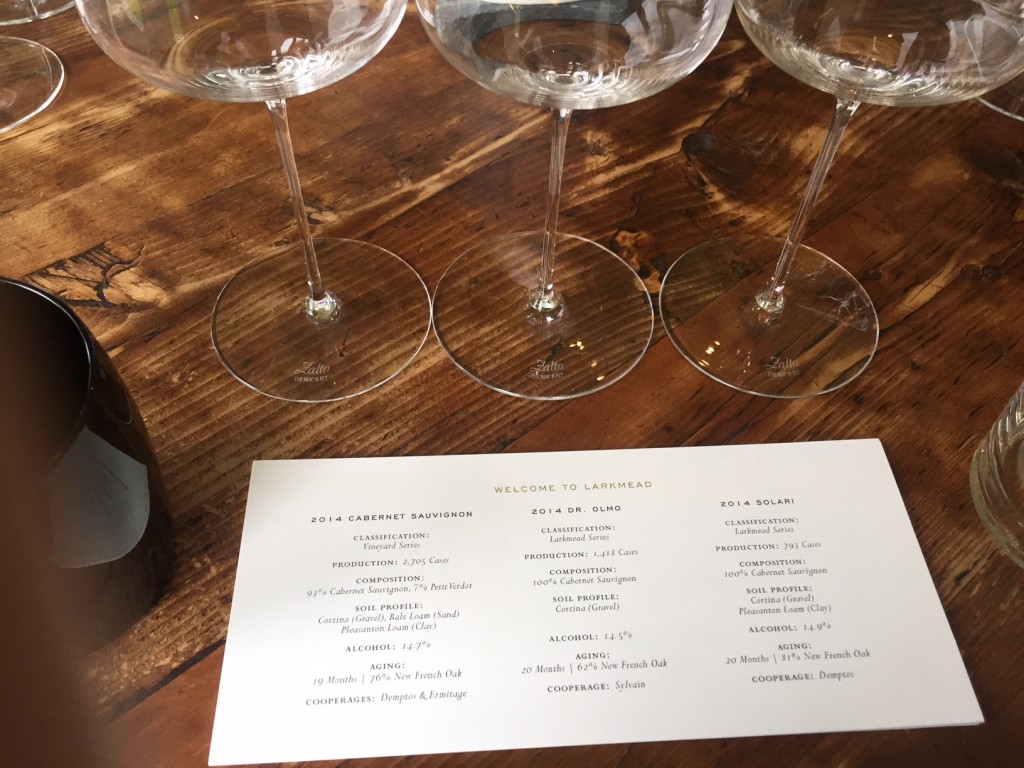 Jeff Smith from Hourglass suggested we make a reservation to taste at Larkmead. Beautiful tasting areas both inside and out, we snagged a couch and settled in for a few tastes. We did learn that the vineyards were established back in the 1800s and the first vintage came in 1930s! Look up Lillie Hitchcock Coit (yes, of Coit Tower fame) to sleuth around more. Lillie had a wild life before she died in 1929. She was the first female volunteer firefighter and sold grapes to churches during prohibition – among other things.

The wines are “heavily allocated” to loyal members. Though all from the valley floor the vineyards have a diversity of soils and gravel. One vineyard, the Dr. Olmo, is named after the famed UC Davis Dr. Olmo that is credited for fighting Phylloxera. We tasted three wines: 2014 Cabernet Sauvignon was all mature developed fruit, velvety soft, pepper and nicely balanced black currant, black plum and black currant with crushed black pepper and spice.

The 2014 Dr. Olmos started with that barnyard nose with the addition of dark chocolate and blackberry while the taste was dry with layered black fruit and tasted oak. The final wine, the 2014 Solari Cab had that barnyard funk, prune, ripe berries, dusty, mint and tannin. The lingering length on this one made it our favorite.

The benefits of membership: calling to make an appointment as you park the car in their lot! We had just received our allocation but my hubby wanted to taste the new Insignia before we put it away for a few years. We got to try more than that, and as I wasn’t “covering” the winery I just wanted to at least give their wines a shout out, sans tasting notes, as I’ve never ever been disappointed with Joseph Phelps: 2014 Pinot Noir, Pastorale Vineyard, Sonoma Coast; 2014 Pinot Noir, Quarter Moon Vineyard, Sonoma Coast; 2014 Cabernet Sauvignon, Napa Valley; 2012 INSIGNIA, Napa Valley (I did note this one as “perfect”); 2014 INSIGNIA, Napa Valley; and a 2015 INSIGNIA, Napa Valley, barrel sample.

Last but not least we had the opportunity to try another winery new to us: Switchback Ridge. Their 2014 Switchback Ridge Merlot gave off that interesting funky barnyard nose, saddle leather at first. Some of that blew off and I got good dark fruit while the 2014 Switchback Ridge Cabernet had pungent thick fruit that softened in the glass, a bit of mint and licorice on the nose as well. In the mouth I tasted layers of blackberry, black cherry, cigar, oak and tannin. Bob Foley makes these two wines.