I did the Carmel-by-the-Sea Wine Walk three years ago. At that time I stayed in nearby Monterey. What a difference not driving makes! Free to finish a taste and not pour out everything, I still split my tasting with my husband Eddie, but this time I enjoyed visiting MORE tasting rooms: 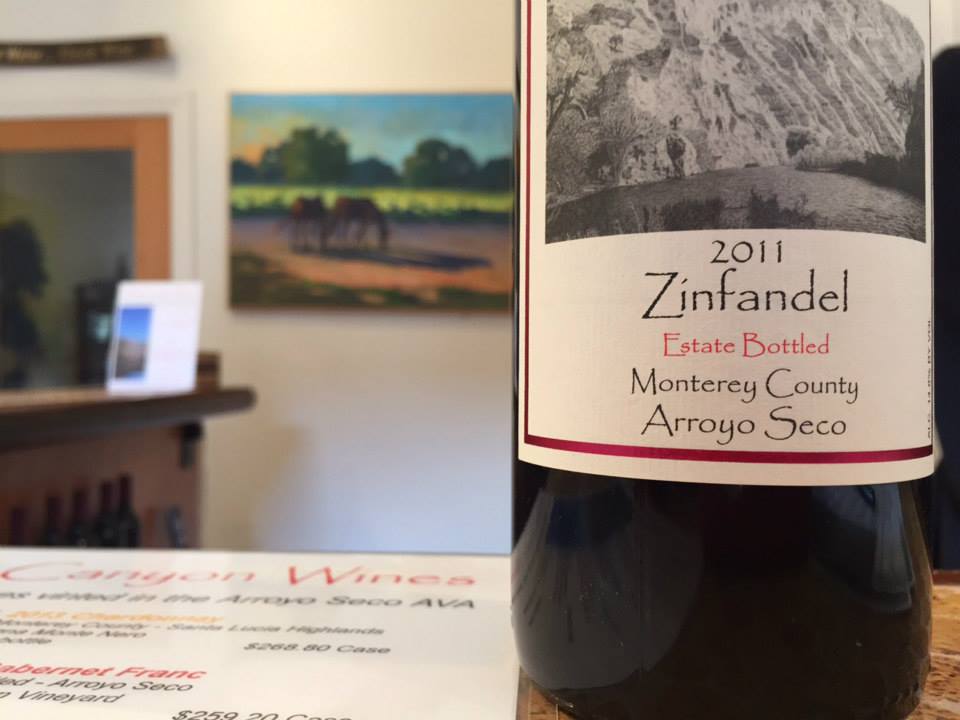 We started at the popular Wrath (named after Steinbeck’s Grapes of Wrath according to the tasting room staff) where we noted a nice 2013 Sauvignon Blanc, 2012 Chardonnay and found our favorite of the day: 2012 Syrah, San Saba Vineyard, Monterey.

Then came Scheid Vineyards where we enjoyed 2011 Triple Layer Red of Grenache, Syrah and Mourvedre.

Enjoyed a limited release Tempranillo and a 2011 Zinfandel at Shale Canyon Wines, a winery from the Arroyo Seco AVA. Every wine they have in their current line-up is 100% the varietal on the label.

Another I had visited three years ago, Silvestri, did not disappoint. This time we were happy with a 2013 Pinot Blanc, a Rose of Barbera and Pinot Noir grapes and a straight Barbera.

A tasting room that wasn’t there when I last visited (more tasting rooms keep springing up!) is De Tierra Vineyards. The young winemaker had several wine club members/fans to tell me what their favorites were. I had to agree that the 2013 Riesling was delightful: more akin to a dry German-style Riesling as this wine was not cloyingly sweet. The aromatics alone were worth savoring, and the taste was a great refreshing end to our day.

(In looking for lunch at the beach or park in a break from our tasting we checked out 5th Avenue Deli for supplies. Here we found more than enough: custom made-to-order sandwiches, a taco bar, salads and the usual necessities like candy, chips…and wine. We were given directions to a local park where we quietly picnicked, the scene complete when a bridal party served as a backdrop to both their photographer and a gift from the bride to the groom: the sudden appearance of a bagpiper in full regalia.)

Never been to a 5-acre “roadhouse” restaurant before so I wasn’t even sure what to wear to Tarpy’s Roadhouse for our dinner ten minutes away in Monterey. The menu and photos online looked great though!

When you arrive in the parking lot you will see – and think, wow this was gorgeous – a pond, a non-working well and the entrance all surrounded by lush flowers and shrubs. Two hostesses greeted us and we were seated immediately.

Amy, our friendly, knowledgeable and solicitous waitress checked in with us, again almost immediately, and we were on our way perusing the bar menu and wine list on an iPad. Amy later recited the specials, which physically caused my salivary glands to go into overdrive, and we made our selections: We shared an appetizer of Deviled Eggs made with spicy tuna over a pepperoni/sausage paste (spicy goodness there that we will definitely try and duplicate at home!), I ordered the Angus Top Sirloin that came with garlic mashed potatoes and grilled Chard with bacon (couldn’t finish it but Eddie could!) and Ed had filet mignon wrapped in bacon, green beans and a decadently rich scalloped potatoes made with Gruyere cheese. He thought they were the best potatoes he had ever had. As we had been wine tasting all day we were pretty exhausted…so I just had a glass of Seghesio Zinfandel while Ed had a vodka martini.

When we were done we asked for a tour. Come to find that there are several private dining rooms for groups of 20, 40, or more. Weddings took place on the property as well as business meetings. The name, Tarpy, belongs to one Matt Tarpy, who, in his day, was well-liked until he turned himself in for killing his neighbor in a land dispute. He was publicly hanged on the same land on which the restaurant now stands.

About The Carmel Wine Walk By-The-Sea

The Carmel Wine Walk by-the-Sea is a self-paced self-guided stroll to the tasting rooms, which are all within a few blocks of each other on the both sides of Ocean Avenue. They are Blair Estate Artisan Wines, Caraccioli Cellars, De Tierra Vineyards, Figge Cellars, Galante Vineyards, Manzoni Cellars, Scheid Vineyards, Shale Canyon Wines, Vino Napoli and Wrath Wines.…(more)

Eve Bushman has been reading, writing, taking coursework and tasting wine for over 20 years.  She has obtained a Level Two Intermediate Certification from the Wine and Spirits Education Trust, has been the subject of a 60-minute Wine Immersion video (over 15k views), authored “Wine Etiquette for Everyone” and served as a judge for the L.A. International Wine Competition, Long Beach Grand Cru and Global Wine Awards.  You can email Eve@EveWine101.com to ask a question about wine or spirits that may be answered in a future column. You can also seek her marketing advice via Eve@EveBushmanConsulting.com