An interesting thing that happens at large wine events: camaraderie grows as wines are consumed, people tend to become chattier and want to share their discoveries of the day.  So instead of just keeping track of what I was digging at the Family Winemakers Pasadena tasting, I listened to the buzz coming from Santa Clarita friends, fellow writers and winery representatives.  Some of the wines they raved about I did get to try, before palate fatigue set in somewhere about 2 ½ hours into it. 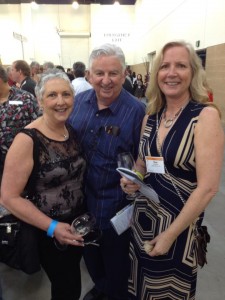 Some of the Buzz

That the event was after lunch so we wouldn’t be drinking on an empty stomach.

There was no line outside or at the check in.

Now, in the wine* department:

Trying Casey Flat Ranch Vineyards for the first time I got to sample their Sauvignon Blanc, Viognier, rose of Syrah and new favorite, their 2010 Open Range Red Blend.

My favorite winery of the day was Derby Wine Estates.  We met owners Ray and Pam Derby over some very awesome Pinot Gris, 2010 ‘FIFTEEN 10’ White Rhône blend and their “IMPLICO” Bordeaux Blend.  Derby only uses about 5% of the grapes they grow, the rest is sold to other winemakers.

I stopped briefly at Fenestra Winery and then my husband took me back as I had missed two interesting wines: True Red, a blend of Rhone, Bordeaux, as well as Iberian varietals from multiple years; and a Touriga National/Touriga Franca red wine grapes found in Portugal.  Keep your eye on this winery.

The Frank Family Vineyards table was very popular; I enjoyed their new Zinfandel.

I had already tasted Guarachi Family Wines Pinot Noirs early this year so I skipped them at the tasting.  As I asked to sample the Cabernet only I noticed the couple next to me also skipped the Pinots.  I turned to them and explained why I had only the Cab and told them that they needed to try the Pinots as well, that they were more than good!  And the Cab?  OMG, I want more.

Fresh from a Halter Ranch component tasting in my home the night before (tasted the four singe varietal Rhônes that go into their red blend, Côtes de Paso) I only tasted the latest Ancestor blend of Cabernet Sauvignon, Petit Verdot and Malbec.  Very well done and ready to drink.

Another new winery for me that I wanted to check out was the Hearst Ranch Winery  – and yes, it’s attached to Hearst family.  They served up a Malbec that had such amazing floral notes that I was drawn in for a taste.  A lighter body than I expected, but yet really interesting.  Like to have more time to dissect that one.  They also had a Grenache-Syrah-Mourvedre Rhone blend (commonly referred to as a GSM blend) that was nice as well.

Herb Lamb Vineyards wowed me, and several others, with their 2011 HL Vineyards Cabernet Sauvignon.

Having just visited J Dusi Wines in their new tasting room on West 46 a couple of weeks ago, I just waved to winemaker Janell Dusi to only say hello.  She waved me over to try one more they just put in bottle: the 2011 Syrah blend.  Another new wine I liked.

I had a teeny tiny sample of the latest Justification blend of Cabernet Franc and Merlot from JUSTIN Vineyards & Winery.  It’s a winner as expected!

I loved three reds from Oakville Ranch Vineyards: Cabernet Sauvignon, a Cabernet Franc and the field blend made up of Zinfandel and Petite Sirah.

An Estate Pinot Noir served up by Pence Ranch & Winery was top notch. 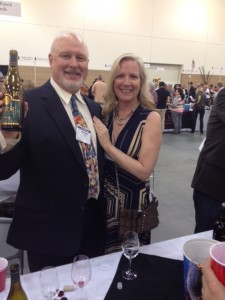 I was tickled to bump into my old friend Michael Fraschilla representing Pride Mountain Vineyards!  I had always appreciated their Merlots and today I did as well, as well as their Chardonnay.  Michael told me that our local Larsen’s Steakhouse would be adding the Chard to their menu soon!

Next up was a Syrah and Claret at Ramey Wine Cellars – both were new to me and I’ll be looking for Ramey from now on at events.

I had a lovely dinner with Swanson Vineyards winemaker Chris Phelps a few years back so I looked forward to tasting his wines again.  His latest Chardonnay and Alexis Cabernet Sauvignon did not disappoint.