Valencia Wine Company’s Annual Holiday Tasting was the wine affair of the season, as promised. Delayed a week by fire and freeway closures there wasn’t a lack of interest or attendance.  People needed a holiday now and it served to get them ready for the real ones to come. 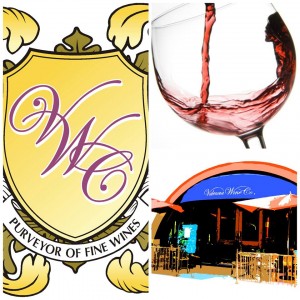 This 4th installment was a testament to proprietor Guy Lelarge’s wine influence in the Santa Clarita Valley. And, being the forth time around, wine, guests and good times quadrupled.  Enough so that the wines sold, offered at a discount to attendees, were sure to be a hit at many holiday tables in the next few weeks.

And if you’re unsure about what to serve this season with your special meals, use this tasting as a gander into the Valencia Wine Company “store.”  I dare you not to add a few delectable wines to your holiday planning list.  Your company will know that you have done your research.  So let’s get started, or as Simon from the American Idol show says, “Off you go”.

“I went to the first event, 4 years ago, we had 4-5 distributors, and that was a great event,” So stated frequent taster Tim Dixon.  “There are so many high-end retail bottles being poured, wines that you never see at a tasting.  And year after year it keeps improving.  No one does tasting better, no matter where you go, than Guy Lelarge.”

“We did it again,” Lelarge explained.  “The finest, the most high end, the best variety of wines from around the world are here.” I had to agree.  Guy knew what to serve for the holidays.

“My favorites so far are everything at Mitch Cosentino’s table,” Said guest Oliver Thomas. I’d drank with Oliver at the Wine Company on occasion and knew his tastes, not always on his native France, to be impeccable. “I recommend that you try the Bodegas Mauro as well.”

The Mauro was a favorite for Sandi Gordon too, “It fits my tongue like a glove”.

From there guests Paul and Jo Ann Vindigni suggested the Chateau Trocard Bordeaux Blanc 2007 reasonably priced for less than $20.  Denise Hollert like the La Rioja Alta Vina Alberdei 2001, again for less than $30.  There were to be plenty of wines available, and just as appreciated, as their more expensive counterparts.

Paul Young, selling his Rhone varietals exclusively to Lelarge in Santa Clarita, had made a fan of local sommelier, George Skorka, with his Schoffit Pinot Blanc 2005 that Skorka simply described as ‘gorgeous’.  I thoroughly enjoyed a decanted wine not on his list: Clos St Jean Chateauneuf du Pape 2006 created by winemaker Philippe Cambie.

From France we traveled to Australia and happily sampled Schild Barossa Shiraz 2006 that consistently had been awarded 90 – 96 ratings from Wine Spectator (WS) magazine throughout the years.  Then while trying a Cigale Meritage we were told, by an unassuming 21 year-old taster, Anthony Storniolo, that the Wayne Thomas Petit Verdot 2005 was “A fruit forward wine with just enough tannin and dryness at the end.”  I queried Storniolo as to his wine knowledge and he credited Certified Sommelier Instructor, DiMaggio Washington, and the class he had taken in wine appreciation that I keep meaning to take.

In New Zealand, John Adams lingered over the Hinton Pinot Noir 2004 with my husband Eddie before they moved onto a Chapoutier Crozes-Hermitage 2007 from France. I savored the dusty Tohu Sauvignon Blanc 2007 run by the indigenous people of New Zealand, the Maori, while Darlene Gandara enjoyed her Italian wine, Gaja Promis 2006, “It’s a staple in our cellar”.

Mark White, who always promises a donation to his local Rotary club every time his name is mentioned in a story, gave local California vintners, Summerland, an ‘A’ for their Pinot Noir Santa Rita 2006.  He also accompanied many of his favorites from the Southern Wine & Spirits table with a surprising giggle.  His wife Julie, who I thought was coming to his rescue, wanted us to try her own pairing suggestion of brownies with a Gloria Ferrer Royal Cuvee 2001. I could see where the giggling in this relationship might have started.  It was a fun pairing.  The only one Lelarge didn’t personally arrange.

Running into local winemakers, Tomas and Jenny Lukas, I decided to taste with them for awhile.  Tomas especially enjoyed the Ken Brown wines, finding “The Syrah nose has pepper, mint, fruit undertones, stiff base…makes me want to eat something roasted.”

Tomas introduced me to his friends, Derrick and Maureen McKaughan, the former described as a drinker and wine expert while the latter said that she knows a good wine when drinks she it. We debated the rating systems between the different experts and preferred to rely on ourselves today.

Well, maybe not exactly on ourselves.  Once again, we trusted Guy Lelarge to hold our one free hand.

The KFWE is the destination for wine and food lovers alike, affording … END_OF_DOCUMENT_TOKEN_TO_BE_REPLACED