Our next day in Chateauneuf du Pape was spent at Domaine Andre Brunel and le Clos du Caillou! At Andre Brunel we learned that the namesake had passed away in February and his son Fabrice, Andre’s longtime apprentice, then took over as winemaker. Some of the Grenache vineyards are 135 years old. One other interesting fact is that in a recent blind tasting of a 1959 Andre Brunel vintage the wine was thought to have been a Burgundy instead of a Rhone! 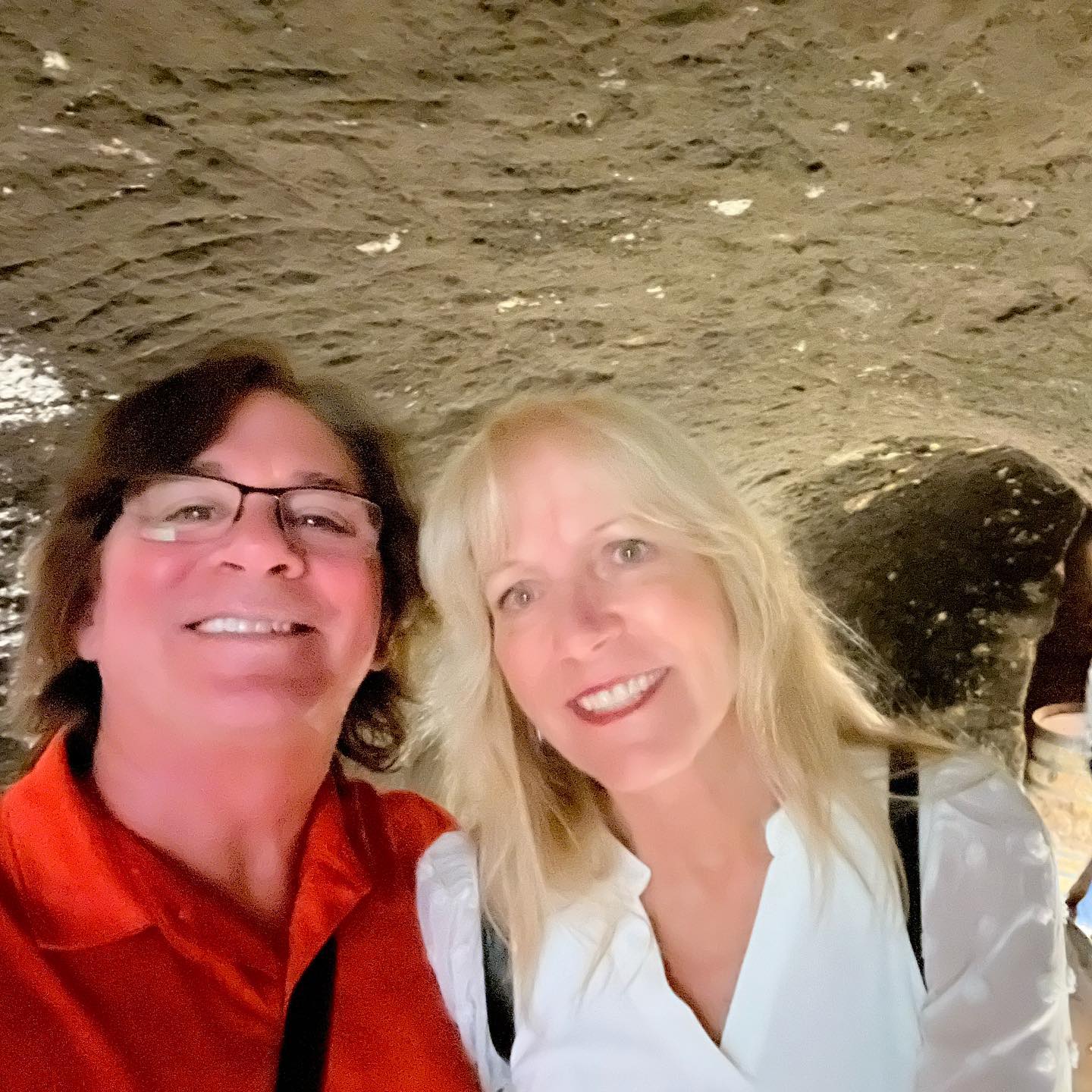 We tasted in the winery, during a day of noisy pressing, but it didn’t keep us from enjoying several wines. Along with their Chateauneuf du Pape label we also sampled blends from their Cotes du Rhone Villages. My favorite was a 2020 Chateauneuf du Pape Les Cailloux that was a 60% Grenache blend with Syrah, Mourvedre and Cinsault. The wine had been aged in a Burgundy barrel.

Onto le Clos du Caillou where some of their wines are grown within the CDP boundaries and some are outside of it in Cotes du Rhone territory.

The Cailloux area, mentioned above in a wine from Andre Brunel, is just outside of CDP but has the same soil and terroir. Some of their vineyards have sandy soils and some are pebbly.

Their Grand Reserve wine is their most famous and comes from pure sandy soils, which for the winery means “elegance, fine tannins and aging potential.” Their new winery, Domaine de Panisse, began in 2020 and the wines are all sold out. In 2007 they went organic and were certified as so in 2010. They are also biodynamic but are not yet certified for that distinction. Grenache is their number one produced grape, followed by Syrah, Mourvedre and other Rhônes. They only work with used barrels.

We tasted seven wines and the most memorable one for me was the Les Quartz Rouge – Chateauneuf du Pape 2020 for its fresh red fruit, richness and smooth balance. The grapes used – 80% Grenache and 20% Syrah – came from the vineyard that just happened to be just outside of the Chateauneuf du Pape region.
Our host said the wine had a 20-year aging potential. The wine was priced at 55 Euros.

Eve Bushman has a Level Two Intermediate Certification from the Wine and Spirits Education Trust (WSET), a “certification in the first globally-recognized course” as an American Wine Specialist ® from the North American Sommelier Association (NASA), Level 1 Sake Award from WSET, was the subject of a 60-minute Wine Immersion video (over 16k views), authored “Wine Etiquette for Everyone” and has served as a judge for the Proof Awards, LA Wine Competition, Long Beach Grand Cru and the Global Wine Awards. You can email Eve@EveWine101.com to ask a question about wine or spirits.