Ana T: havin a glass of vino and I thought of you, lol, hope you’ve enjoyed one tonight as well! 🙂 This message from a Facebook friend prompted this return: It’s funny you said that Ana, I do find myself thinking of other people that might be enjoying wine, somewhere else, while I’m doing the same. Great idea for a story! 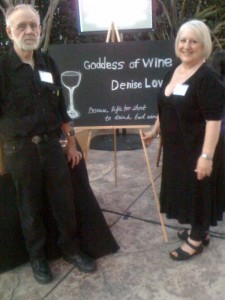 John Dickey and Denise Lowe, the Goddess of Wine was the event sommelier!

Margerum M5 last night was very smooth. Love the Rhone blends coming out of Santa Barbara and Paso. Looking forward to Carhartt and Koehler wine club pick ups in Los Olivos this weekend! Then on Saturday I had a Semler 05 Merlot, just back from a tasting at the winery. Very nice finish for a Merlot. What a beautiful afternoon here!

Denise G: The first night of the weekend we had Venteaux 2009 Zinfandel (they also make an excellent Mouvedre) at an alcohol level of 16.9% – WooHoo! Then we opened several last night in Laguna Niguel with good friends: Ecluse Rendition, Cakebread Cab, Tobin James Petite Sirah, Red Soles Chardonnay and Bogle Phantom. (The Phantom is an interesting blend of Petite Sirah 55% – Zinfandel 42% – Mourvèdre 3%, I hear it is hard to find.) The music was as good as the wine – Mike O’Bryan, who plays at Tobin James at Zin fest. Awesome!

By the way, if you (no, WHEN you) get to Paso THIS SUMMER, you should go to Red Soles. Great reds. The chard was good, too. Maybe we need to plan a weekend trip?

Mark S. (our correspondent in Tulsa): Tasting at Tidal Schools was interesting yesterday. OK Cab Franc and a Shiraz that showed promise. Mediocre wines but I’ve seen real progress in five years with likes of Stone Bluff here. Went to a party last night and oh Lord, was the wine bad! So tonight we intend to make up with it….with a couple of great reds and a great dinner to celebrate pool opening and another raised garden that I built this morning.

On Saturday night we had 06 Sineann Cold Creek Cab and 02 d’Arenberg Dead Aem Shiraz in decanters waiting for yard work to be done and steak cooked.  We’re drinking Dain 05 Smart Set Syrah as we work….

David L, aka Risqué Sommelier: is sitting on the patio at Katsuya waiting for his Burning Mandarin Martini that is studded with vodka, crushed Serrano chilies, fresh lemon juice, orange juice, a splash of cranberry and topped with a thin slice of Serrano chili. Later he moved on from a martini and on to a Watermelon Cucumber Mojoto. (Risqué always refers to himself in the third person.)

Steve Lemley, Pulchella wine owner: Nate and I finally spent the night evaluating progress on all the 08 Pulchella vintages. The Cab is progressing amazingly, the Zin is always perfect (it seems to make itself thanks to the quality of the vineyard), the Rosé is done oaking, the Syrah is toying with us but we love a spicy challenge sometimes. We opened a 05 Estate Zin and WOW!

Michael H: Cakebread Cellars 2005, Benchland Select Cab Sauv and tonight Delheim 2006 Pinotage…Fig, cassis and a little chocolate on the end. The perfect amount of oak was the most spectacular and surprising feature though. Not too much, not too little. Perfect.  Also, we had honey wine and Ethiopian food at Messob (http://www.yelp.com/biz/messob-ethiopian-restaurant-los-angeles) in little Ethiopia followed by Janice Joplin martinis at Lola’s on Fairfax and Santa Monica.

Larry E: Started Friday night with a bottle of sparkling Pinot Gris, followed by a bottle of Serpent Ridge Vintner’s Cabernet and a 2001 Tarius Zin (no longer made). Saturday night… no wine, don’t ask me why, I don’t know! Tonight will start with a bit of Australian bubbly, then a New York Anthony Road dry Riesling and followed with a Maryland Black Ankle Crumbling Rock. We’ll finish with a XO cognac. And maybe a nice Sligo IV cigar to round out the evening.

Theresa G: I shared a bottle of Sausalito Canyon’s 2007 Zinfandel Dos Ranchos with my girl friend last night. Yummy! Going to break into their 2007 Petit Sirah tonight at a Memorial Day party.  If you haven’t tried Sausalito Canyon wines, it’s a must! They’re really very good.

Elaine H: 2003 Martin Estate Reserve Cabernet Sauvignon, Gondomar Grand Reserva 1996 Ribera del Duero. These were the highlights thus far…but Scott is making Sockeye salmon and shrimp (bought at Whole Foods flown in this morning) that we will have with Otter Cove Santa Lucia Highlands Riesling and a Sandalford 2005 Cab Margaret River with cheese after.

Brooke B: Hey, Eve, just had a little Sterling Chardonnay at Sisley on Friday night. Yummy. Although my favorite is Cakebread!!

Laura B: I know this DOES NOT fit the theme….but I have a cold G&T waiting on me! 🙂 (Editor’s note: we think this is Gin & Tonic)

For us: Started our weekend with a Nickel & Nickel 02 Cab from the Dragonfly vineyard (yes the same one that wouldn’t let our locals keep the name and are now going by the name Pulchella).  It was ready to drink, with perfectly poised fruit, and prompted us to remove another 6 bottles of 02 from our cellar.  Each of these has different vineyard names that I’m now thinking of Googling – to not only see how many names they have taken off the wine-naming market, but also to see if any are recommended to go longer than the current 7 years.

Saturday night it began with a tasting at Le Chene with vintner and owner Juan Alonso, Felix’s 2004 Cuvee of 65% Grenache and 35% Syrah and then the Felix 2007 100% Syrah.  Even though Juan boasts Wine Spectator Magazine’s Best of Award of Excellence with his 34 page wine list, his own wines were very charming.  Later, at The Social, we’re happy to find a tasty Turnbull 05 Cabernet.

And this is just a partial list of what people will be drinking this weekend from the Valencia Wine Company (Yes, you know I just had to check in with my wine guru) at the SCV Wine Classic tomorrow night: From Strange Wines: Truchard Estate Chardonnay 2007, Roessler Pinot Noir 2007 and Lang and Reed Cabernet Franc 2007. From Wine Warehouse: Pio Cesare Barbera d’Alba 2006, Pio Cesare Cortese Di Gavi 2007 and Far Niente Chardonnay 2007. From TGIC Importers: Bodega Norton Malbec Reserve 2006.