One of the first wine fests I attended as press was the LA Wine Fest.  Founder Joel Fisher was very kind in extending passes and personally welcoming us at the event.  Since then I’ve covered the 500+ winery/brew/spirit event in photos, as my hands are always too full with a wine glass and program to manage a pad and pencil. 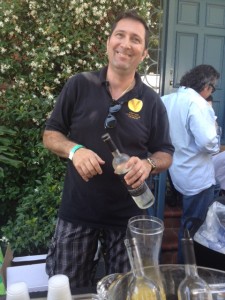 Through the fest I’ve also benefitted from Sake, Scotch and even cheese pairing classes that Fisher offers from a wide variety of educators.  The first time I had Ventura Limoncello, Herzog Cellars, Roxo Port, and wines from Ventura County was at the fest.  I have fond memories of meeting friends from both Santa Clarita and Los Angeles, as well as people-watching a new generation of wine friendly people.

www.BondBars.com had a homemade bark made from Belgian chocolate, not overly sweet and perfect for my palate.

From www.CieloFarms.com, we enjoyed their Woodstock Collection 2012 Purple Haze and 2011 Anthem red blend.

It was nice to find www.CaseyFlatRanch.com after discovering them earlier this year at Family Winemakers.  I enjoyed their 2013 estate Sauvignon Blanc, Rose and Viognier wines while my husband got his first taste of their 2010 Estate red blend of Cabernet Sauvignon, Syrah, Cabernet Franc and Mourvedre.

I spied sommelier Adem Sash of Del Frisco’s Grille leading a pairing seminar to a nice crowd of press and wine tasters.

I took the “Nut Tasting Tour” cleverly offered by www.CrazyGoNutsWalnuts.com and learned that I liked walnuts flavored with orange almost as much as the ones with Parmesan.

The very first display from the Van Ness entrance was from uber-popular www.CupcakeVineyards.com.  I stopped long enough for a splash of refreshing prosecco.

Tried something new at www.DirtyTequila.com: a Dirty Margarita made with their cinnamon and pineapple infused tequila.  Loved it.

www.ReyesWinery.com was there with attentive crowds in both the VIP lounge and at a pouring table sharing their award-winning wines. 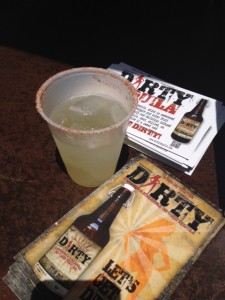 Though the “chocolate man” has melted at the www.EOSChocolates.com table, the samples did not.  Very nice chocolates with flavors ranging from orange to ginger to crushed nuts to pepper.

Greg Martin, winemaker and owner of www.SevenAngelsCellars.com in Paso Robles was very interesting.  His seven kids, angels at one point, were the namesake of the winery, and he made well over 7 wines that we enjoyed: 2010 Petite Sirah, 2011 Kindred red blend, 2011 Grace red blend, 2011 Confession red blend, and several whites including a 2012 Grenache Blanc.  Will definitely be watching this winery.

Every time I get to try www.VenturaLimoncello.com I’m a happy girl.  Owner James Carling also served up a cocktail with vodka, sparkling water and ice, and my favorite Orangecello.

Tasted a few wines from www.BEvineyards.com: 2009 Merlot and 2009 Reserve Cabernet Sauvignon while chatting up with www.LAWineFest.com founder Joel Fisher and his right arm/daughter Sara Fisher Chapin.

Picked up a copy of Len Napolitano’s book, “Nose, Legs and Body” for review – looks like it’s perfect for wine 101ers! 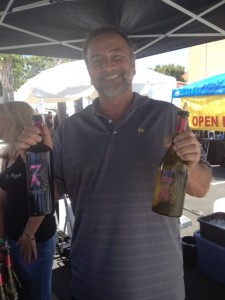 Had a surprise from Temecula Valley: www.LeonessCellars.com impressed me with their lineup that included a 2011 Grenache, 2010 Meritage of Merlot, Cabernet Franc, Cabernet Sauvignon and Petite Verdot, 2011 Syrah and Port.

Also from www.TemeculaWines.org, I found both a 2011 Lorimar blend of Cabernet Franc, Syrah and Mourvedre, and 2011 Hart Syrah.

I gave singer Nicki Minaj’s MYX fusion drinks a shot and thought the coconut would pair quite nicely with a little sparkling water…and a bikini.

The spiced up nuts from www.SanteNuts.com went well with all of the wine, beer and spirits.

Both our local winemakers, Nate Hasper and Steve Lemley, of www.PulchellaWinery.com, were on hand for the first time sharing their Paso wines at the fest.

www.ShortMountainDistillery.com wowed me with their aptly named “Shine” version of Tennessee Moonshine.

Gotta love this tagline, “KOOKSOONDANG puts human beings on the front burner before brewing wine” and a lineup that included Grapefruit Rice Wine (I was told that the rice wines are made in Korea and not allowed to be called Sake), Raspberry Rice Wine and Plum Wine.  Check them out at www.BeksejuUSA.com or in your local Korean market.

At www.JVSimports.com I enjoyed two single malts: the very smooth and nutty Tamdu and the richly-peated Smokehead.

The very large www.StellaArtois.com tent did a brisk business.  The lovely ladies clad in red served up several beers, including a hard cider, in their appropriate glassware.  The guests really dug getting a full glass, and being able to take the glasses home.

Some of the wineries and vendors we missed (only as we ran out of steam 3 ½ hours into the event) can be found in the listings below: